May 29, 2019 – The Galena Park Independent School District Trustees (GPISD) is working towards the completion of the voter-approved $290 million school bond projects with the ground breaking ceremony for the soon to be built 2 story replacement school of the Jacinto City Elementary School. The $26 million new school is scheduled to be completed by the fall of 2020.

The elementary school home of the Tigers was built 75 years ago in 1944. It was a small single story building consisting of an office, small kitchen, cafeteria and several classrooms for the 200 students. As student enrollment increased the building was enlarged and renovated several times to its current size with 925 students attending.

The district has 15 elementary schools and the trustees plan to replace and build 6 new elementary schools, renovate 24 other campuses and facilities, upgrade safety and security and fully conform to the Americans with Disabilities Act district-wide with the bond funds.

END_OF_DOCUMENT_TOKEN_TO_BE_REPLACED

Harris County Sheriff Deputy Sergeant E. Rivera said, “The crooks and bad guys crisscross back and forth from law enforcement jurisdictions so the sheriff’s department and Houston’s police department work closely together on solving and preventing crime.”

He said gun and cell phone is highly sought after by criminals.

“Criminals don’t buy their guns legally, they steal them from citizens who are careless with their guns,” Rivera said. “Cemeteries is a place citizens usually get careless, they leave purses, cell phones and guns unlocked in their vehicles while walking away to visit graves.”

Houston Police Sergeant T. Schmidt reported crime statistics along the East Corridor from downtown Houston eastward to Beltway 8 along the East Freeway (IH-10) including Pleasantville and Clinton Park. Reports of breaking into vehicles was high with 64 cases, 77 cases of thefts, 27 cases of robbery, 28 auto thefts and 23 cases of aggravated assault.

END_OF_DOCUMENT_TOKEN_TO_BE_REPLACED

The 15,000 sq. ft. fire station is the third station in the ESD#60 District, and with expansive growth of the area, the plan is to build two more and another to replace the existing station on C.E. King Parkway, according to Fire Chief Sydney Webb.

Webb presided over the grand opening ceremonies, and the ceremonial ribbon cutting and hose uncoupling for the two buildings.

Participating in the ceremonies were members of the ESD#60 board, with Helen Lauersdorf, president; and Fire E-board members, with Curtis Roane, president. Also speaking were “Pistol Reed” the son of Paul V. Reed, whom the training center is named for, and Judge Joe Stephens.

The Training Center is a tall 5-story building, to be used to train firefighters in multi-story rescues and fires. The fire station has room for six vehicles in three drive-thru bays. It also has offices, sleeping rooms, training and exercise facilities, and a day room with kitchen and TV.

END_OF_DOCUMENT_TOKEN_TO_BE_REPLACED 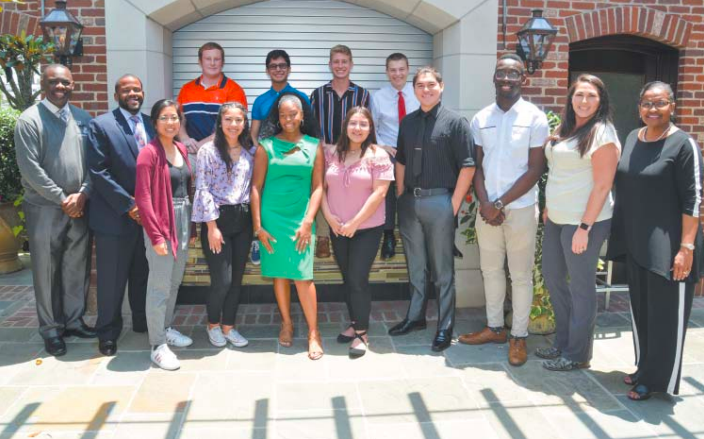