Sheriff Hawthorne reports that on Thursday, August 8, at approximately 7:28 p.m., the Chambers County Sheriff’s Office was notified by the LaPorte Police Department of a possible multi-fatality drowning at Sylvan Beach Park.

Sylvan Beach Park is a county park within the city of LaPorte, Texas, and Harris County. However, the bay waters that border the park are wholly within Chambers County.

Upon arrival of the Chambers County deputies it was learned that a family from the Houston area were swimming in the park when an otherwise beautiful afternoon took a tragic turn. Six members of the family, including the Mother, Father and four children ranging in age from 7 to 13, began having trouble in the water. The Mother and Father, along with a 10 year old male child were able to make it back to shore with help from nearby good samaritans.

HIGHLANDS – The U.S. Environmental Protection Agency (EPA), in cooperation with the Texas Commission on Environmental Quality (TCEQ), Federal, State and Harris County agencies, local officials and industry, plan to hold a Community Meeting for the San Jacinto River Waste Pits Superfund site. During the meeting an update will be provided on current site activities and the cap inspection data.

HIGHLANDS – This month’s meeting of the THEA/San Jacinto River Coalition dealt with potential threats to the integrity of the cap over the waste pits, as the community waited for the slow process of removing the toxic waste to go forward.

Jackie Young announced that she had learned that the Pelican Asphalt Permit, wanting to dredge areas near the Waste Pits, had been approved on July 3 without any further public notice.

ReACT in a Heartbeat, a Baytown Non-Profit that teaches life saving C.P.R. instructed some 200 students how to perform Cardio-Pulmonary Resuscitation at the same venue. These were not certification classes but exposure classes and man of the students went from having their hearts tested to learning to save someone else’s life.

“We always try to teach C.P.R. training at our screenings we don’t usually do it at school screenings because kids are supposed to get C.P.R. certification from their school but anytime we have a community screening we try to team up with someone group and teach the basics.

Now Stephens says, “We are going to try to help put EKG machines in schools so that athletic teams can check out their own members.”

The Stephens fight to save young lives for the last seven years as Scott’s family has attempted to impress upon the Texas Legislature that young athletes dying of sudden death can hopefully be avoided with early detection by the new E.K.G machines that have not only gone from being the size of an ambulance to the size of a paperback book and ranged in ability from being only able to tell if someone was having a heart attack to being able to read rhythms and irregularities. It began with a personal note for Scott, his son Cody died in May of 2012 from sudden death. His last words to his father were “Go big or go home.”

Flores speaks out against animal cruelty

Jacinto City, TX. – August 12, 2019 – College Student Cinthia Flores, in a statement made to NC Star writer Allan Jamail, said, “In the first place, people should never get a pet if they don’t have the means for caring for it properly. But if they get one and then later realize they can’t properly care for it, they should give it to someone who will. I’m on a strict college student budget but I still manage to save enough to provide shots, food and a healthy place for my pets.”

Dogs kept outdoors are the most common pets to be mistreated, 70 percent of animal cruelty cases is dogs. With daytime temperatures in the 90’s and 100’s, it doesn’t take long before a pet can have a heat stroke. 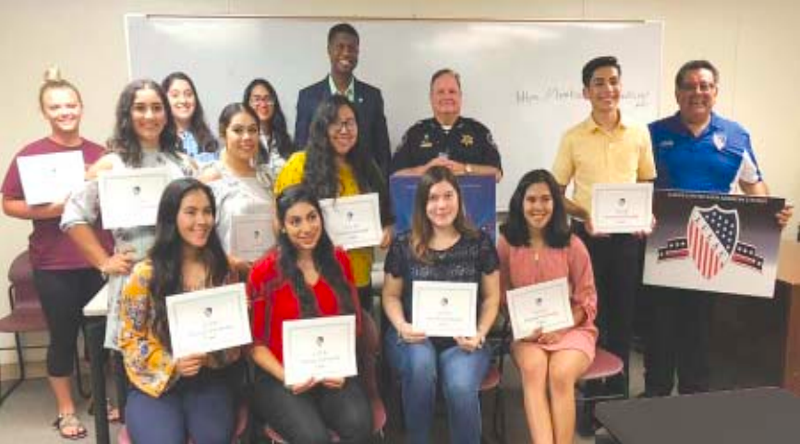 Galena Park LULAC Council 4703 gave out $12,500 in scholarships to college-bound students from our local area this evening. Thank you to LULAC member Justice of the Peace Joe Stephens who came out to share his life story of success and words of encouragement to these students and Lt. Charles Brown from Constable Chris Diaz’s office. If you are an incoming senior in high school and you want to apply for the LULAC scholarship go to the LNESC.org website to get the application in February 2020. Pictured with the students are Judge Joe Stephens, Lt. C. Brown and LULAC President Cruz R. Hinojosa, Jr.