Galena Park ISD Stadium, Friday, November 8, 2019 – The Galena Park Yellow Jackets ended their season with an easy win over the Houston Wisdom Generals 41 – 0. The Jackets showed improvement from the previous year winning more district games but not enough to qualify for the district playoff games.

Friday’s game was Parents Night that was never a real contest, from start to finish Coach Spiro Amarantos’ offensive and defensive team’s dominated the Generals.

Seniors having played together since their freshmen year became a close knit bunch, and found it to be emotional to part with their football relationships. The night’s joyous victory wasn’t enough to stop the tears from players, parents and friends that had gathered in a large crowd to say goodbye to the senior players.

END_OF_DOCUMENT_TOKEN_TO_BE_REPLACED

Coach Jon Kay’s Mustangs offense rushed for 365 yards and passed for 210 yards (575) and his defense held the Falcons to 83 rushing yards and 34 passing yards. They continued to have a high number of 9 penalties giving up 84 yards.

END_OF_DOCUMENT_TOKEN_TO_BE_REPLACED 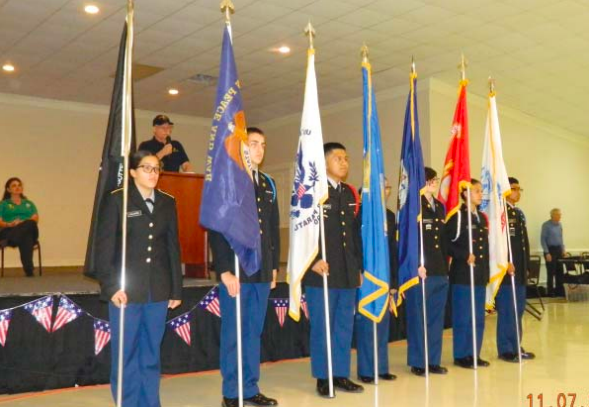 The North Channel Chamber held their annual Salute to First Responders and Veterans last Thursday, Nov. 7 at Armentia’s in Channelview. Several hundred attended the luncheon and ceremony honoring their service.

END_OF_DOCUMENT_TOKEN_TO_BE_REPLACED

In the 2018 sweep by Democrats in Harris County, the office of County District Clerk brought in a new face. It can be said one of the county’s most important offices is that of District Clerk.

A Texas district clerk is a “constitutional officer of county government” found in Article 5, Section 9 of the state’s constitution. The district clerk is the custodian of the “official record of the district courts” and must mark the exact date and time of receipt and issue all papers including subpoenas, citations, warrants, and summons.

Marilyn Burgess (D) defeated incumbent Chris Daniel (R) in the general election for Harris County District Clerk on November 6, 2018. She wasted no time after officially taking office by signing her first order as Harris County District Clerk at midnight, January 1, 2019 and has been working hard to serve the people ever since. Though she has been in office less than a year, her innovations are already making a difference.

END_OF_DOCUMENT_TOKEN_TO_BE_REPLACED

Yuroba Harris, well known in the 29th Congressional District, was recently honored at a special program on November 2nd by S.A.F.E. Diversity Communities for her work on promoting Education, Career Awareness and Scholarships for students. Harris worked as the District Director for many years for retired Congressman Gene Green. She’s currently working on special initiatives for Congresswoman Sylvia Garcia with a number of faith based, nonprofit, civic organizations, community development and revitalization committees and boards.