MUSTANGS MAKE HISTORY WINNING BACK TO BACK STATE CHAMPIONSHIPS

Arlington, Texas — On Saturday, December 21, 2019 at the AT&T Stadium, in front of 47,818 spectators, the North Shore Mustangs — rated number one in the state — became the first team in University Interscholastic League (UIL) Class 6A Division I history to win consecutive state championship games. In a rematch game with the Duncanville Panthers, who the Mustangs defeated in 2018, they once again won 31 to 17.

Since the beginning of the UIL Class 6A Division I in 2014, Coach Kay and the Mustangs made history by being the first to win three state championships.

North Shore won despite being without three of their starters. Zach Evans and Jermond Batiste were grounded because of not complying with the team’s cell phone policy. This made three games Evans has had to sit out due to disciplinary reasons. Shadrach Banks has been unable to play in several games due to an injury.

END_OF_DOCUMENT_TOKEN_TO_BE_REPLACED

Houston, Texas – Nearly 200,000 northeast Harris County residents now have access to public transportation thanks to $3.8 million in Hurricane Harvey disaster recovery funding. Harris County Transit Services will expand its existing bus service to some of the communities hardest hit by floodwaters from the hurricane.

The new service will primarily serve areas of Channelview, Cloverleaf and Sheldon and provide an additional scheduled bus to the route serving Crosby/Barrett Station.

A soft launch of the new service occurred on December 2. The first 60 days are free to riders. After that, rides will be $1. The inaugural ceremony to mark the launch was held Wednesday, Dec. 18 at Joe V’s Smart Shop parking lot, 5609 Uvalde, Houston.

END_OF_DOCUMENT_TOKEN_TO_BE_REPLACED 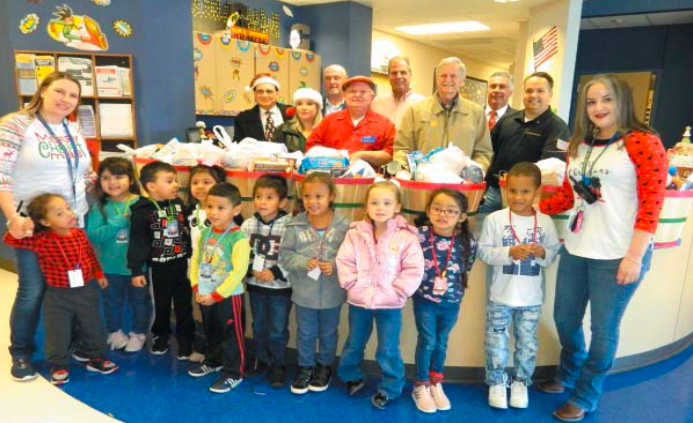 NORTH SHORE ROTARY CLUB PACKED AND DISTRIBUTED OVER 200 CHRISTMAS BASKETS TO NEEDY FAMILIES IN GALENA PARK, CHANNELVIEW, AND SHELDON. IN THE PHOTO ABOVE, BASKETS ARE DELIVERED TO CHANNELVIEW ISD EARLY CHILDHOOD CENTER.

END_OF_DOCUMENT_TOKEN_TO_BE_REPLACED

Authorities were called to a mobile home on Amie Michele Lane off Wood Road in Channelview last Monday morning about 9:30 am, to investigate a shooting in which three men were killed.

Sheriff Ed Gonzalez reported that three or four men backed a car into the drive of a mobile home, occupied by two males. They entered the home, with an unknown motive, possibly robbery. The family thinks it may have been a personal grievance, but the occupant Yair Gallegos said he did not recognize any of the men.