Heading into the 2020 season, East Houston United didn’t want to repeat its heartbreaking 2018 season by losing another championship as they did in 2018. After going undefeated 20-0 into the playoffs, they lost the 2018 championship game to Louisiana in the UBA playoffs.

United took the 2019 season off to evaluate other professional league options. They were impressed with the new National Basketball League – United States (NBL-US). It’s the official feeder league to the NBL-Philipinas and the NBL-Jamaica. By joining the new league the competition would be much better so the team had to improve in order win the championship and a chance to make history.

The NBL-US kicked off its season February 2020, and through 5 weeks, East Houston United was a perfect 5-0 and was on its way to a 2nd undefeated season.

Due to Covid-19, East Houston United did not have a chance to finish the regular season, but held out hope the playoffs would still be played. Five months later, the NBL-US league last weekend opened back up to complete their playoffs.

END_OF_DOCUMENT_TOKEN_TO_BE_REPLACED

HIGHLANDS – The monthly meeting of the San Jacinto River Coalition, and THEA, continue to be held as a virtual meeting on the internet, due to the Pandemic closing all of the available community centers.

Jackie Young Medcalf held the August meeting last Tuesday, and reviewed the significant material that had recently been released by the EPA. This is a series of reports, known as the 30% Remedial Design, numbering about 12 books and 30,000 or more pages.

Her review was from the viewpoint of how the toxic waste will be remediated, how it is characterized for disposal in a landfill, and how it will be safely disposed of and stored for perpetuity.

Jackie also reported that Gary Baumgarten of the Dallas EPA had made a presentation to the CAC, or Community Advisory Council via Zoom, to explain the details of the 30% Remedial Design.

One of the important revelations of the study, is that due to the toxic waste being deeper than originally assumed, much more material will have to be removed, and the project is now projected to take 7 years, instead of the original 2 to 3 years. The new quantity is calculated to be 210,000 cubic yards, 30% more than the original figure of 162,000 c.y.

END_OF_DOCUMENT_TOKEN_TO_BE_REPLACED

“This is a rapidly evolving situation and we are constantly assessing what actions are necessary to keep residents and staff safe in these facilities,” said Phil Wilson, Executive Commissioner, Texas HHSC. “By following these procedures and rules, facilities can more effectively prevent the spread of COVID-19 and help us achieve our shared goal of reuniting residents with their families and friends.”

“Access to family and loved ones is an important part of every resident’s health and well-being, which is why this policy shift is a move in the right direction for some of our most fragile Texans,” said Sen. Lois Kolkhorst (SD18), Chair, Senate Committee on Health and Human Services.

“Today’s announcement is a critical first step for every person in a longterm care facility and their loved ones,” said Rep. James Frank (HD-69), Chair, Texas House Committee on Human Services. “This decision underscores that state leaders recognize the need to balance the emotional and physical health impacts of isolation against the serious dangers that COVID poses to these vulnerable Texans.”

END_OF_DOCUMENT_TOKEN_TO_BE_REPLACED 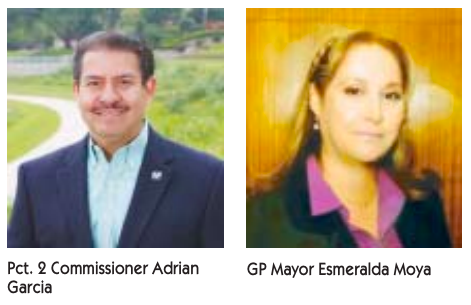 HARRIS COUNTY – Precinct 2 Commissioner Adrian Garcia is proud to announce that construction on the Port Houston Sidewalk project is scheduled to begin this month.

“It is our duty as elected officials and local leaders to take care of and serve our residents to the best of our abilities,” said Commissioner Adrian Garcia. “This project is the perfect example of what can happen when we work together, and I’m thankful for our partners and their collaboration in making this much-needed improvement possible.”

This project is in partnership with Harris County Precinct 2, Port Houston, and the City of Galena Park.

Improvements include the construction of a 6- foot-wide, approximately 1.9-mile-long concrete sidewalk on Mercury Drive from the Galena Park Sports Complex to Holland Avenue.

END_OF_DOCUMENT_TOKEN_TO_BE_REPLACED

Sheldon ISD has released our Safe Start Plan for the 2020-21 school year that contains guidelines for school day operations, instructional plans, safety protocol and more. Please help us spread the word so our families are informed.

Our first day of school is 100% virtual on September 8. We will be virtual the first four weeks of school.

The plan can be found at sheldonisd.com/ start2020/