Posts published in May 2019

Hillary remains very popular in the Houston area; in 2016 she won with 54 percent of the votes, she carried Harris County with 162,000 more votes than Donald Trump and got more votes than President Barack Obama had won four years earlier in 2012.

The former U.S. Senator, Secretary of State, First Lady and recent presidential candidate criticized President Donald Trump and called the upcoming 2020 presidential election one of the most critical in the nation’s history.

Clinton said, “We can’t just cross our fingers and pray and hope for a perfect candidate to come along. We have to organize and work hard getting out the voters. We must talk about the issues and remind Americans we are the party that can deliver for them. We support health care for all, women’s rights, an economy that provides fair wages for all, equal pay for women, decent immigration laws, protecting the children of immigrants and we also are the party that will stand up and protect the Constitution and address what is a very real constitutional crisis that this president has put us in.”

END_OF_DOCUMENT_TOKEN_TO_BE_REPLACED

After needed repairs, Battleship may be moved

LA PORTE – The Battleship Texas may be in line for another big battle, and the loser may be La Porte and East Harris County.

In a last minute maneuver in the 86th Legislative session, State Representative John Cryer (R-Lockhart) and State Senator Robert Nichols (R-Jacksonville) sponsored a bill that would allow the ship to be moved to another location, reportedly Galveston, after it received $35 million in state money for repairs in a shipyard in Alabama. SB1511 provides for the transfer of the ship from the Texas Department of Parks and Wildlife to the Texas Historical Commission, and then to a nonprofit, possibly the Battleship Texas Foundation. Who would make the final decision on relocation is not clear from the bill.

Local state representatives Mary Ann Perez and Briscoe Cain have been vocal in opposing the move. Perez pointed out that the Galveston population is seasonal, and there is no guarantee that more people would visit than in La Porte. Cain filed an amendment to stop the ship from being relocated, but it was not in the final bill.

END_OF_DOCUMENT_TOKEN_TO_BE_REPLACED 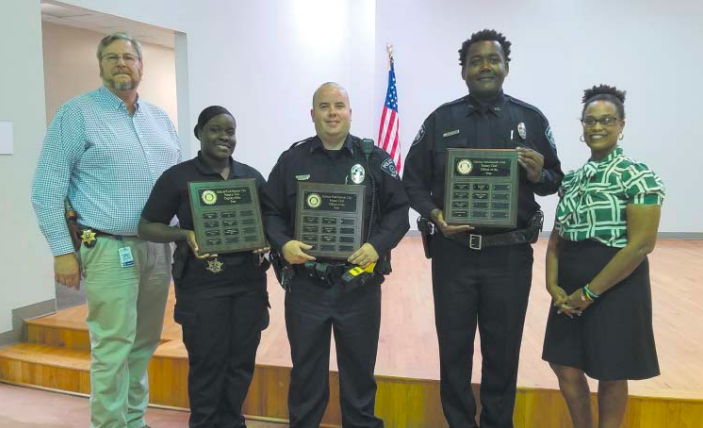 END_OF_DOCUMENT_TOKEN_TO_BE_REPLACED

San Jacinto College – Central Campus, Pasadena, Texas – Wednesday, May 15, 2019 – Adrian Garcia, Precinct 2 Harris County Commissioner sponsored a meeting to inform and obtain feedback from the communities from Galveston to Houston on the newest studies and proposals for Hurricane protection.

There were two separate plans presented, one long term plan by the US Army Corps of Engineers costing from $23 to $32 billion. This plan is presently in the Study Phase, once the study is completed in about 2021 Congress then must approve the funding for the Design Phase which will take 4 or 5 years. The Construction Phase could start in about 2025 if Congress approves the funding. The construction is estimated to take 10 to 15 years with completion in year’s 2035 to 2040.

Blackburn said their plan named the Galveston Bay Park Plan is different from the U.S. Army Corps of Engineers plan to build 71 miles of barriers along the Texas coast and instead their proposal is for a 25-foot-high wall running across Galveston Bay and barrier islands. He said construction could start almost immediately and completed by year 2027 with a total cost of $3 to $5 billion.

Blackburn wants to use the current dredging spoils from deepening and widening the Houston Ship Channel to build-up land barriers islands along the storm surge routes to lessen flooding inland from Galveston to Houston.

END_OF_DOCUMENT_TOKEN_TO_BE_REPLACED

The Cody Bill, or House Bill 76, that provides an opt-in opportunity for parents to have their children screened with an EKG before participating in competitive activities, passed the Texas Senate on May 20 by a vote of 20-11 after clearing the House overwhelmingly.

The bill goes back to the House for an amendment before going on to the Governor who can sign it or do nothing after 15 days and the bill become law. The bill probably comes into effect in 2020.

END_OF_DOCUMENT_TOKEN_TO_BE_REPLACED

NORTH SHORE – Under the direction of counselor Carmela Garcia, the students at North Shore Elementary participated in a unique Career Day event last Monday morning. About a dozen local businessmen and agencies set up information exhibits in the parking lot of the school, and groups of students listened to a talk about the unique qualities of that career.

The event lasted about two hours, and groups of students listened to each career expert for about 15 minutes, and then rotated to another career.

NORTH SHORE – Catfish or Crawfish? It didn’t matter, you had a good meal and a great time at last Saturday’s 44th Annual Rotary Fish Fry. And at the same time, Rotary raised a record amount to use for community projects.

Event chairman Ryan Dagley, and club president Bill Bowes, reported that the club made about $470,000 in ticket sales, live and silent auctions, and sponsorships.

END_OF_DOCUMENT_TOKEN_TO_BE_REPLACED

EAST HARRIS COUNTY – A tragic accident on the I-10 bridge over the San Jacinto River, between Channelview and Highlands, took the life of a 4- year-old girl and critically injured her father.

The accident occurred Wednesday morning, about 7:00 am according to authorities, when a semi truck and a sedan collided in a westbound lane.

Sheriff Ed Gonzalez indicated the accident may have occurred when the semi tried to merge into the lane with the auto. Prosecutor Sean Teare, of the Harris County District Attorney’s Office, said the truck swerved when a vehicle in front of the semi made an abrupt stop. Teare said that “this is just one of those convergence of events that ended in a horrible tragedy. Anybody who has driven in Houston knows that it happens all the time.”

END_OF_DOCUMENT_TOKEN_TO_BE_REPLACED

Jacinto City, Texas – On Saturday, May 11, 2019, at about 6 PM — a busy time for shoppers — the El Ahorro Supermarket store #6, located at 10341 Palestine Street, had about 200 feet of the roof awning covering the sidewalk collapse. The awning fell on four vehicles, while no one was inside them or on the sidewalk.

Jacinto City’s Police Chief Joe Ayala and Fire Chief Rebecca Mier both came to the scene and said no one reported being injured.

During the week leading up to the collapse, the Jacinto City area had received about 9 inches of rainfall. According to Lon Squyres, the City Manager, the initial thought is the awning is made of stucco material and it might have absorbed rain water to the degree that the extra added weight could have caused the structure to give way. The official cause is under investigation.

HOUSTON — May 10, 2019 – A unified command has been established to respond to a collision on the Houston Ship Channel at Light 71-74 between a 755- foot tanker and a tug pushing two barges near Bayport, Texas, last Friday. The unified command consists of the Coast Guard, Texas General Land Office and Kirby Inland Marine.

Sector Houston-Galveston watchstanders received a report that the tanker Genesis River and the tug Voyager collided. The tug was transporting two barges loaded with the gasoline blend stock Reformate.

One barge has capsized and one is reported damaged.

END_OF_DOCUMENT_TOKEN_TO_BE_REPLACED Friday, May 3 was a night of celebration, reflection and fun for the North Channel Relay for Life. The event was hosted at Galena Park ISD’s North Shore Ninth Grade Center Track in conjunction with Sheldon ISD and Channelview ISD.

This year’s theme was “Carnival for a Cure” and there was over 529 registered participants, 55 teams, 180 survivors and 65 caregivers. The North Channel Relay for Life has raised over $125,000 for the American Cancer Society and money continues to come in!

We would like to thank the North Channel Relay for Life Committee and the numerous organizations and businesses who had a hand in making this event a success.