GPISD stadium – Friday, September 9, 2022 – It was a classic Texas Friday Night Football contest. The Galena Park (GP) ISD North Shore Mustangs hosted the Spring ISD Spring Westfield Mustangs (SWM) in a battle of the unbeaten. With both teams ranked high in the state each brought their Mustang Nation fans and filled the stadium to capacity leaving standing room only viewing.

GPISD’s Superintendent Dr. John Moore said when it was decided to close the gates because of reaching the safe capacity limits people still tried to get inside through other entrances. He said some fans even went and got on the sidelines without authorized field passes, so security and school officials had to have them removed.

The two Mustang nations turned out but only one went home happy… it was the Eastside Boys who spoiled Westfield’s night, romping 55 -25.

END_OF_DOCUMENT_TOKEN_TO_BE_REPLACED

After losing their talented and experienced line who helped win the 2021 State Championship title Coach Jon Kay and his assistant coaches rebuilt their defensive line. So far with exceptions to their penalties this “D” line appears speedy and prepared to tangle.

END_OF_DOCUMENT_TOKEN_TO_BE_REPLACED 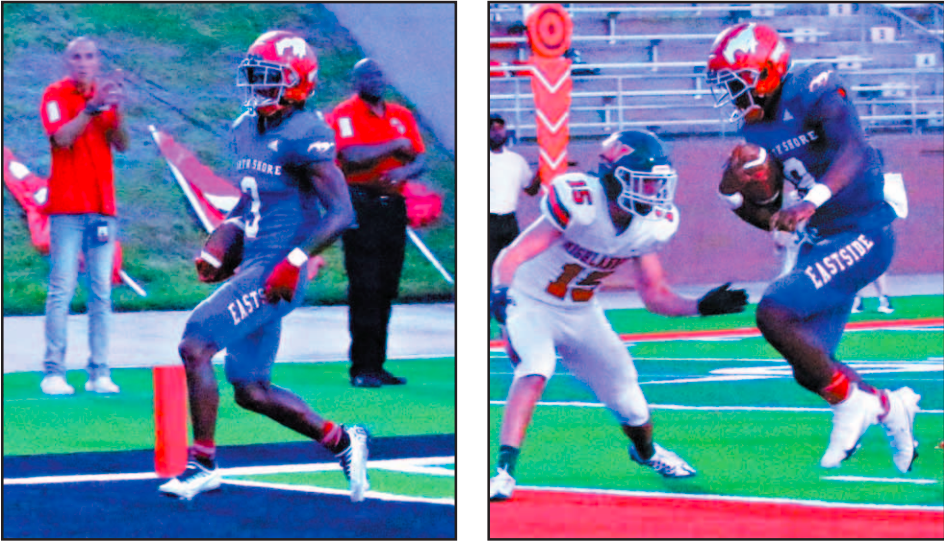 GPISD stadium – Thursday, August 25, 2022 the Defending 6A State Champion North Shore Mustangs trampled the visiting Woodlands Highlanders (WH). It was a “cakewalk” from the opening kickoff.

The Eastside Boys (NS) scored 28 points in the first quarter. They kept a double digit lead from start to finish in the non-district game. Ending the first half 42 – 7. Head Coach Jon Kay pulled his starters in the final quarter and then the Highlanders managed to score. The final score; NS 49 – WH 21(See touchdown photos scoring details)

END_OF_DOCUMENT_TOKEN_TO_BE_REPLACED

GPISD Stadium – Houston, TX. ~ In their first game of the season, the home team Galena Park Yellowjackets (GP) (5AD2) and Goose Creek Memorial Patriots (GCMP) (5A-D1) battled back and forth with lead changes. Both teams are in 5A. The 4th quarter ended in a 29- 29 tie, putting the non-district contest into overtime.

Head Coach Spiro Amarantos’ Yellowjackets got the opening kickoff and scored early on their first drive. GCM followed with a TD, ending the 1st quarter tied, 7 – 7.

In the 2nd quarter the Jackets senior running back Jonathan Gutierrez scored again for his 2nd touchdown (TD). GP’s kicker Oswaldo Flores had his extra point kick blocked. Before the 1st half ended with 5 seconds on the clock, Flores kicked a 20-plus yard 3-point field goal, ending the 1st half with a 16 – 7 Jackets lead.

END_OF_DOCUMENT_TOKEN_TO_BE_REPLACED

HOUSTON – Wednesday, May 18, 2022, in the mid-afternoon at the GPISD football stadium, the Eastside 2021 varsity team received their championship rings. Also getting rings were others who contributed to the program’s winning season.

Players, coaches, trainers, and other associates of the football program lined up next to tables spread out over 150 feet. They were waiting with eager anticipation of opening the sealed ring boxes on the tables. No one was allowed to see their ring until Head Coach Jon Kay gave the go-ahead to open the boxes. And when he gave the word to open, loud sounds of excitement could be heard from the recipients by the crowd of spectators gathered to watch the event.

END_OF_DOCUMENT_TOKEN_TO_BE_REPLACED

April 7, 2022 – Houston, Texas – At the Bayou City Center, some 20 miles away from the Eastside Boys’ home turf, the GPISD’s Championship Mustang football team was given an awesome celebration banquet. Over a thousand family members and fans attended to witness a recap video titled, “The Eastside Dynasty,” of the team’s 3rd state championship title in 4 years.

On December 18, 2021, the North Shore Mustangs beat the Duncanville Panthers 17 – 10 in a thriller to capture the UIL 6A Div. 1 Texas High School Football State Championship in front of 43,000 plus spectators. The game was a brutal defensive struggle; Head Coach Kay called it a “slugfest,” rightly so. Only 3 touchdowns were made, and a pair of field goals.

Terri Moore, Associate Superintendent, kept the program’s agenda moving in an orderly fashion. She introduced the Special Guests and gave the following points of information about the team’s season.

She said, “Now, you all may know the season officially started on January 11, 2021. That’s a total of 337 days devoted to making this championship dream come true. During that time our champions have had:

END_OF_DOCUMENT_TOKEN_TO_BE_REPLACED

February 22, 2022 – At the Pasadena Sam Rayburn High School gym, the Pearland Lady Oilers brought GPISD North Shore Lady Mustangs’ playoff hopes to a close, winning 38 to 37. As this low score tells, the game was a defensive battle and, as usual when this happens in a close game, it was the team with the ball in their possession in the final seconds who won.

The game many thought would be an easy win for the Eastside girls ended up as a shock and surprise when Pearland won by one point in the final couple seconds. The shock and surprise was because earlier in the season, North Shore won against Pearland by 24 points, 54 – 30.

North Shore’s coach Allison Campbell said the first time they played the Lady Oilers, they didn’t have all their starters, as they did in this game. Plus they added a new player to their team that the UIL recently cleared to play.

The North Shore team had more turnovers than normal, and this was because Pearland’s defense was so aggressive. Atria “Tree” Dumas, the Mustangs’ leading rebounder and a double digit scorer, was held to only 3 points, where she usually gets near 20 points a game. She was double-teamed most of the time when she played. Coach Campbell took her out of the game for half of the first quarter and all of the 2nd quarter, because Campbell said Dumas had 2 early fouls and she didn’t want her to foul out.

END_OF_DOCUMENT_TOKEN_TO_BE_REPLACED

February 17, 2022 at 6 pm on the neutral court at the Pasadena Memorial Gym, the GPISD North Shore Lady Mustangs edged out the Clear Brook Wolverines in overtime for the Area Finals Round (2nd playoff game).

This game from the beginning tip-off was a barnburner till the final second in overtime. The Wolverines looked early on as the winner, having led by 12 points at one time. The Eastside Lady Mustangs never gave up, and clawed back several times to tie the game, and sometimes have a 2 or 3 point lead.

The lead in the game changed back and forth all the way into the final minutes of regulation play. Clear Brook had a 2 point lead, 60 – 58, with 4 seconds on the clock. The Lady Mustangs quickly got the ball down court and tied the game, sending it into a 4 minute overtime period, 60 – 60.