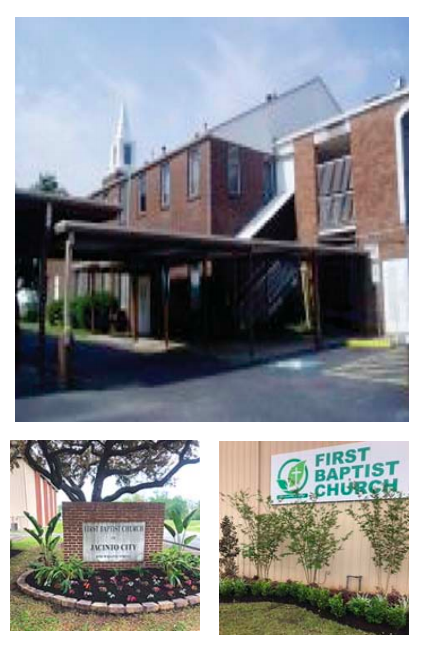 Remaining in the same location since the beginning, the First Baptist Church of Jacinto City (FBCJC) will celebrate its 75th anniversary on August 18, 2019. Located at 10701 Wiggins, the church and its members have seen many changes throughout the community, but it has remained strong and committed to presenting the message of Jesus Christ and His resurrection.

With the first meeting on August 6, 1944, and housed in a tent, a church was formed with the name of Universal Baptist Church. With an initial membership of 117, the last charter member on the roll died in 2008. The first building was completed in 1945 and served as the sanctuary, office space and classrooms. This building now serves as a worship center for a Hispanic Congregation, Iglesia Bautista Resurrection, and the church offices.

Shortly after Jacinto City became incorporated, the church took the name of First Baptist Church of Jacinto City, this was in March 1947. In August 1951, on the 7th anniversary, the second building, a new sanctuary was completed. Because of continued growth and the need for more meeting areas, the Education Building was completed in June 1965 and includes classrooms and a nursery for infants and children through the age of three years. With more growth and the desire to reach people throughout the greater North Channel area, the Christian Family Life Center (CFLC) was completed in July 1986 and includes a full size gym, kitchen facilities, a fellowship area and additional classrooms. A renovation and updating of the sanctuary was completed in time for the church’s 50th anniversary.

Our church has gone through a complete makeover since this time including our new sign with new logo and we welcome everyone to come see the new face lift, but more important, come see the work that God has done within the members. This church is very much alive and will continue to grow.

Bro. Rick Blount will celebrate his 15th anniversary as Pastor at the same time as the 75th anniversary for the church is recognized on August 18, 2019. Invitations have been sent to many of the previous members, asking them to celebrate with the present members. Following the morning worship service, which begins at 10:50 a.m.

There have been many changes in Jacinto City but the church has continued to have a strong Christian foundation. Under the leadership of Bro. Blount and a committed congregation, the church accepts the mission to follow God’s leadership into the future. If you are looking for a place to worship, you are welcome to come and worship with FBCJC.