Campaign to move Battleship to Baytown 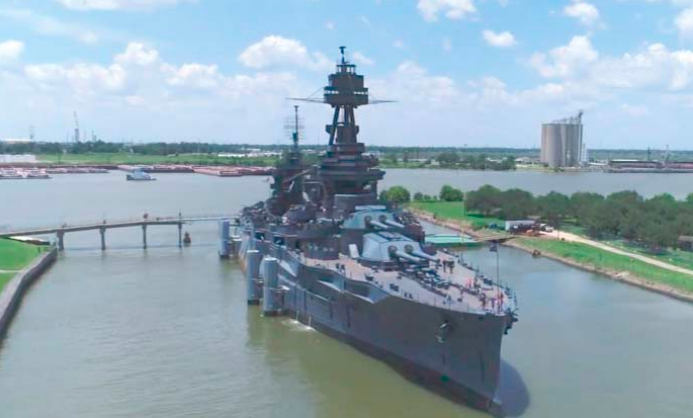 BAYTOWN – A grassroots citizen group is leading the effort to bring the Battleship Texas to a berth in Baytown, after it is repaired and restored.

The group is headed by businessman Jay Eshbach, with help from well-known historian Russell Hamman, Jake Daniel, Peter Piontkowski, and others.

The Battleship was originally built in 1912, and has seen service in both World Wars. Since 1948 it has been berthed at the San Jacinto Battleground State Historic Park in LaPorte.

The State of Texas has spent $85 million to preserve the ship and keep it afloat, but now wants to turn it over to a private foundation to maintain and operate. The new owner is the Texas Battleship Foundation, and wants a new site where it can attract 300,000 visitors instead of the 80,000 in LaPorte. Admission fees must pay for the upkeep of the ship, which will cost $2 million yearly.

Texas has voted to spend $35 million more to remove, repair, and relocate the ship. Several locations have indicated interest, including Galveston, Corpus Christi, and Baytown.

Some local politicians want it returned to the Houston Ship Channel where it currently sits. State Representative Briscoe Cain introduced a bill to keep it in LaPorte, only to see the provision stripped from the final bill. Harris County Pct. 2 Commissioner Adrian Garcia got the county to pass a resolution to keep the ship where it is, but admits a lot of money would need to be spent to create a proper tourist attraction around the ship.

Meanwhile, Baytown citizens have started a pledge drive to raise money for continued maintenance. By pledging only 27¢ a day, or $100 per year for 5 years, they think they can show enough support to attract the ship’s caretakers to Baytown.

They also have a website and Russell Hamman has his history website, “Baytown History with a Twist” to promote the idea that the Texas belongs in Bayland Park in Baytown.