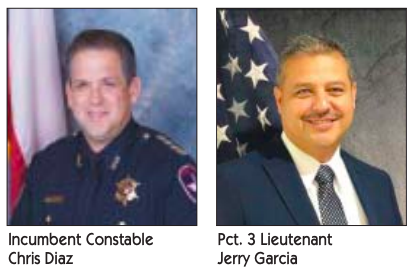 Harris County voters are currently voting by Early ballots, prior to Election Day on July 14. This is a Run-off Election, with many important positions to be decided. Winners will go to the General Election in November.

One of the races of most interest in the North Channel area is Harris County Precinct 2 Constable race, with incumbent Constable Chris Diaz facing a strong challenge from Jerry Garcia, a Lieutenant in the Precinct 3 Constables office, under Constable Sherman Eagleton. Voters have been following this race for months, since the Primary in March, with charges and innuendos thrown out by both candidates. In the Primary, Diaz got 34% of the votes, or 5081, and Garcia got 39% or 5721 votes. Neither received a majority and therefore face this run-off.

Diaz has held the office for the last 7 years, and is running on his record of accomplishments. Prior to his term as a constable, he was a councilman and mayor of Jacinto City, where he still lives. Garcia is running on his long experience as a law enforcement officer for over 22 years. He lives in the South Belt area of the Precinct.

Both candidates have accused the other of improprieties. Charges were leveled during a Zoom debate on June 23rd. Diaz said that his opponent was “disloyal” and had left Precinct 2 to work in Precinct 3. Garcia cited a number of instances of questionable ethics by Diaz. Last year, he was accused of retaliation by some of his staff, of which some were demoted or fired. In January, Diaz participated in an eviction in South Houston which had questionable authority and legality. And in the constable’s race, he is accused of paying filing fees for a “straw horse” candidate, also named Jerry Garcia, to confuse voters and defeat Lt. Garcia.

Garcia says it is time for a change, and to bring back integrity, positivity, and transparency to the Constable’s office. Diaz says his record of accomplishments speaks for itself, including increasing number of deputies available for patrol, having a special operations unit that took $24 million of drugs off the street in 2019, and continuation of a strong community outreach program.

Diaz has a large group of endorsers in the campaign.

The winner of this Democratic run-off will face Republican candidate Daniel Vela in the general election in November.

Other Run-offs are scheduled on the Democratic ticket for US Senator, between Mary MJ Hegar and Royce West, and US Representative in District 10, Mike Siegel vs. Pritesh Gandhi.

For Railroad Commissioner, Roberto Alonzo is opposed by Christa Castaneda; for State Board of Education, Michelle Palmer vs. Kimberly McLeod.

Of major interest in this area are Democratic State Representatives, County Commissioners, as well as the Constables. In District 138, Akilah Bacy is opposed by Jenifer Rene Pool. In District 142, Harold Dutton Jr. is running against Jerry Davis. In District 148 Anna Eastman vs. Penny Morales Shaw.

On the Republican runoff ticket, US Representative race in District 18 has Robert Cadena vs. Wendell Champion; and in a much watched race, District 22 has Troy Nehls vs. Kathaleen Wall.

For Sheriff on the Republican ticket, Paul Day is running against Joe Day. The winner will face the Democratic incumbent Sheriff, Ed Gonzalez, in the November election. For Justice of the Peace, Precinct 5 has Russ Ridgway vs. Mike Wolfe.

On Election Day, July 14, polls will be open from 7am to 7pm. A reminder that this year you may vote at any location, not just the one in your area. If you voted in a particular party in May, Democratic or Republican, you must vote in the same party in the runoff. If you did not vote in May, you may choose either party to vote.