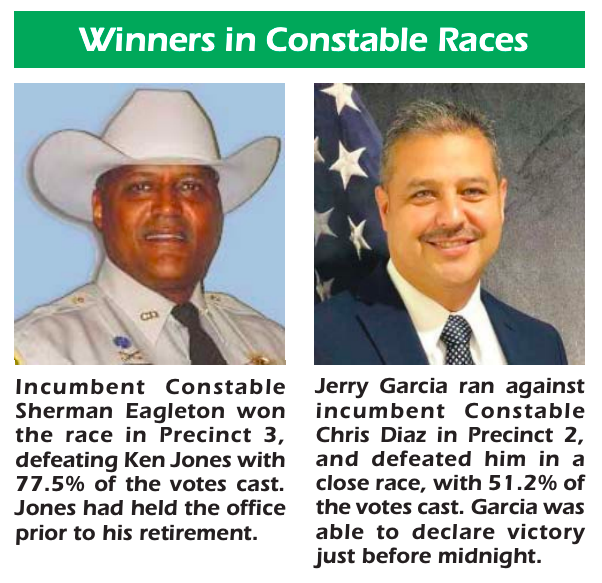 HARRIS COUNTY – Tuesday, the Democratic and Republican Parties held their Run-Off Primary elections and the results in several races were different than had been predicted.

Jacinto City and vicinity had a showdown between Precinct 2 Constable incumbent Chris Diaz against challenger Lt. Jerry Garcia. This was a close race, with Garcia winning by only 229 votes of 9,505 cast. This race had been marked with negative charges of unethical practices and favoritism on both sides.

Substantially more people voted in the Democratic Party in early voting at several Precinct 3 locations. Early voting counts in Crosby were 744 Democratic and 434 Republican most probably due to the hotly contentious local Precinct 3 Constable race between incumbent Sherman Eagleton, and previous constable Ken Jones, and the fact that there were more contests at issue for the Democrats. Over 150,000 votes were cast county wide on the Democratic ticket. The Republicans drew about 60,000 on their ballot.

Voters are no longer designated to specific voting precincts but habitually tend to vote at locations near where they live and with which they are familiar.

This election had two early news breaks for the Democrats, Diane Trautman resigned due to health issues as Harris County Clerk, her term would lapse in 2022. Andrea Duhon withdrew as Harris County Department of Education (at Large) School Trustee. The Harris County Democratic Precinct Chairs vote at County Executive Committee to be held on computer on August 15 to officially replace these two before the November 3 General Election.

In the U.S. Senate race. M.J. Hegar against Royce West to face incumbent Republican John Cornyn. This was a close race, with West winning 50.5% of the vote in Harris County. But statewide Hegar won 52% of the votes, and will face Cornyn in November.

For State Representative in District 142, popular incumbent Harold Dutton jr. was opposed by another local favorite, Jerry Davis. Dutton won with 52.32% of the vote.

Statewide, for Railroad Commissioner Roberto Alonzo opposed Chrystra Castaneda, who won with 61% of the votes.

An important race was for Harris County Pct. 3 Commissioner, with Michael Moore winning with 56% of the vote, versus Diana Martinez Alexander.

The contest for District Judge 164 pitted Cheryl Thornton against Alexa Smoots-Thomas. Thornton won with 70% of the votes.

For the State board of Education District 6 Michelle Palmer had 64%, opposed by Kimberly McLeod.

The Republican Primary Runoff will determine who challenges Ed Gonzales for Harris County Sheriff. Paul Day and Joe Danna were the showdown most discussed for Republicans. Danna received 51.46% of the vote, and will face Gonzalez in November.

Another closely watched race, with much money spent on campaigning, was for U.S. Representative in District 22. Kathaleen Wall lost to Troy Nehls who had 70% of the votes statewide.

James Lombardino and Terry Adams were contestants for the First Court of Appeals. Adams won with 69% of the votes.

US District 18 was a match of Robert Cadena against Wendall Champion. Champion had a strong showing with 71%.

The Justice of the Peace for Precinct 5 Place one saw Russ Ridgeway and Mike Wolfe.