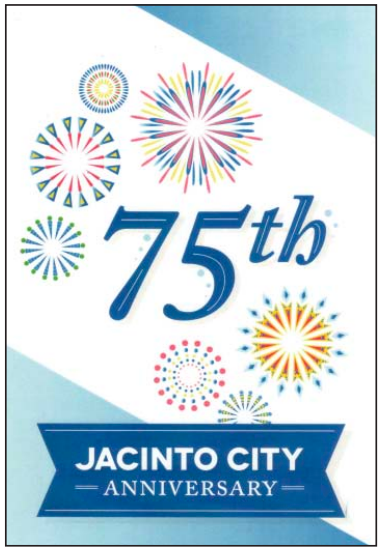 JACINTO CITY – Excitement is building, as this community nears its big May 8 Celebration of the 75th Anniversary of the town’s founding, in 1946. The festivities will center around the Town Center on Saturday May 8, but is also going to involve the whole community with a bus tour of historical landmarks, starting at 1:30pm at Town Center.

Then at 3:00 there will be an Official Ceremony of speakers and refreshments inside the Town Center. The official program as described by City Manager Lon Squyres will include a Welcome by Mayor Ana Diaz, Comments from City Council Members, and then formal greetings from Regional Elected Officials.

Emphasis in the program will be on the history of the city and the people who live and work here. Mayor Diaz and Assistant City Manager Kathy Greiner will introduce past officials and employees. A slide show with historical photos of the city, many never seen before, will be presented before the ceremony. Fire Chief Rebecca Mier has been reviewing over 800 photos for the show.

Other activities will include a Trivia Contest with Councilwoman Carmela Garcia, Historical Recognition by Councilman Jimmy Rivas, and a report on the Ongoing History Project by City Secretary Joyce Raines. City staff with longevity will also be recognized.

Later, from 5:00 to 9:00 pm the Market by Night will be held on the plaza, with music, vendors, exhibits, and food trucks.

And after dark, the 75th Celebration will be highlighted with a Fireworks Show at Town Center.

Everyone is invited to join in the fun, but please RSVP so that the city can plan on how many will attend. Contact Mrs. Joyce Raines at 713-674-8424 or by email at Joyce.Raines@JacintoCityTX.gov.

The North Channel Star newspaper will publish congratulations ads. Contact the paper at 713-266- 3444 with your message.