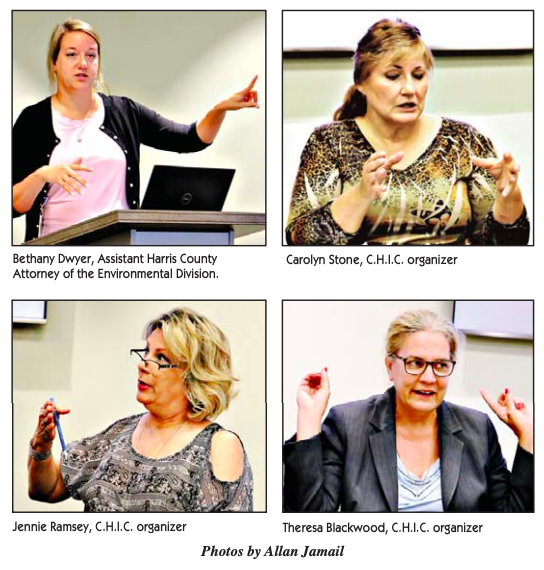 Dwyer explained what’s needed to successfully present a case in court against environmental violators. She presented an exceptionally informative slide show which thoroughly educated the attendees on the step by step process of how to file a complaint. She explained the need for complainants to gather and document valuable evidence on the violators that’ll give the CAO proof enough to be successful in court proceedings. Violations can be reported by calling: CAO: 713-755-5101.

For an emergency with a chemical spill, odor, or fire, call the Channelview Fire Department: 911.

C.H.I.C. has organized in a continuing effort by residents to share information, to educate others and to work with governing and other agencies to address issues impacting Channelview, to bring awareness and to document, prevent and improve the issues and conditions affecting residents.

Menefee said Harris County has the largest petrochemical complex in the U.S. and a history of severe weather events. “We’re vulnerable to large scale chemical disasters that impact residents.” He also proposed additional enhancements to the rules, including expanding the list of chemicals covered by the rules, requiring facilities to have safety plans in place to endure severe weather, and improving coordination with first responders.

President Obama’s administration’s EPA had imposed several rules in response to the fertilizer plant explosion in West, Texas. In 2019, the Trump administration rolled back many of these commonsense requirements, including requiring chemical companies to determine the root cause of spills and explosions, and training requirements for chemical plant supervisors. In response, Harris County, 14 states, and two cities sued the Trump administration to invalidate the rollbacks. Harris County was the only governmental entity in Texas involved in the lawsuit. The entire County Attorney’s press release can be found at: https://cao.harriscountytx.gov/