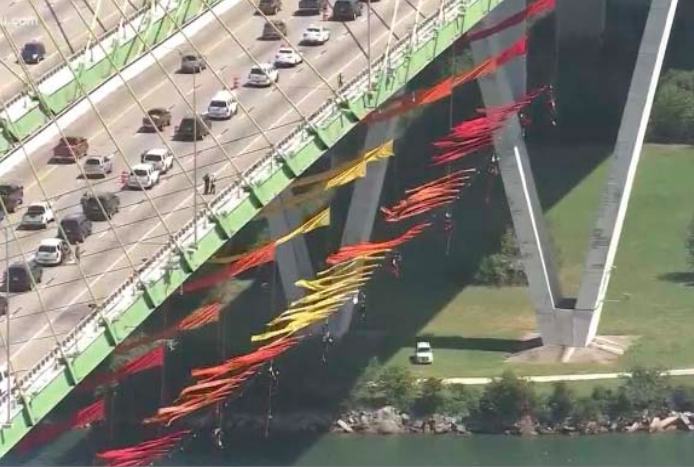 GREENPEACE protesters hang from the side of the Fred Hartman Bridge in Baytown last Thursday, with colorful flags blowing in the breeze to call attention to their stunt. Protesters chose this location because it is over the Houston Ship Channel where much of the ship traffic is oil tankers. The timing of the protest was the same day as the Democratic debate in Houston, meant to call attention to the need for environmental and energy regulations to reduce on-going climate change.

BAYTOWN – A group of young men and women from the Greenpeace movement chose last Thursday, the day of the Democratic debate in Houston, to stage a dramatic protest by dangling over the side of the Fred Hartman Bridge, suspended over the ship channel where oil tankers normally move.

There were 11 protesters hanging from ropes below the bridge rail, and another 12 on the bridge helping them.

On the Greenpeace USA Twitter page, they stated that they were protesting the fossil fuel industry, and trying to block the oil tankers exporting in the channel below. The Coast Guard said they had closed about one-half mile of the channel for safety reasons. The protesters are dangling about 100 feet above the water. The bridge is 180 feet above the water. A fall could be deadly, they were warned.

The protesters said that their plan was to dangle in place for 24 hours, but as of Thursday evening, only 12 hours into the incident, authorities had removed most of them.

Northbound traffic across the bridge was severely interrupted during the police activity. Harris County Sheriff’s deputies had arrested the 12 on the bridge earlier, and were working with the Houston and Baytown fire departments to lower the rest of the protesters to boats below, from the Coast Guard, Sheriff’s office and Houston police. Demonstrators were taken into custody after lowered to the boats.

On Friday, the 23 protestors bonded out of jail, but face charges of obstruction of road and ship channel that could lead to a year in jail and a $10,000 fine.