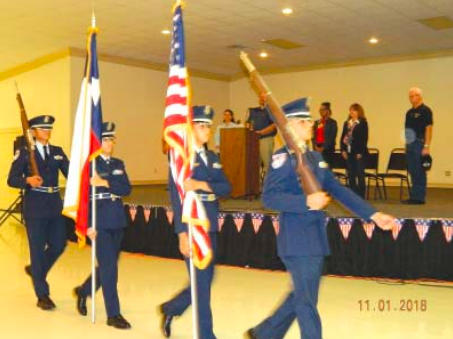 The North Channel Chamber will hold its 11th annual Salute to Veterans, current military personnel, and First Responders. Also taking place will be a Business Expo and Health Fair. The event will be held at Armenta’s Reception Hall in Channelview, 823 Sheldon Road, from 10 am to 2 pm on Thursday, Nov. 7, 2019. The public is invited. There are booths and sponsorships available by calling the Chamber at 713-450-3600. Last year’s photo from the Expo.

END_OF_DOCUMENT_TOKEN_TO_BE_REPLACED

HARRIS COUNTY – Monday Oct. 21 is the first day of Early Voting in the General Election. East Harris County area residents will vote on 10 constitutional amendments, METRO’s MetroNext bond issue in some areas, Baytown councilmen, and Newport MUD bonds, . Early voting continues through November 1, and you may vote this year at any election location. The General Election is scheduled for November 5.

Proposition A on the ballot would authorize a $3.5 billion bond issue, to be used for METRO street improvements, mobility projects, and other facilities. Funds for this work would come from the existing Sales Tax, and there would not be any additional taxes required. Projects included in this proposal are a new MetroRapid Bus System, more HOV lanes, and extension of the MetroRail system.

Texans will vote on 10 new Constitutional Amendments on November 5th. The issues addressed include a state income tax, creating a flood infrastructure fund, and funding for the Cancer Research and Prevention Institute of Texas. The League of Women Voters of Texas (LWVTX) conducts research on each amendment to provide fair and unbiased information to Texas voters.

Amendments to consider in this election:

END_OF_DOCUMENT_TOKEN_TO_BE_REPLACED

Mustang Coach Jon Kay mixed up his offense using several players both rushing and pass receiving to never fall behind in the game. His special teams players shined and scored numerous times.

North Shore’s offense racked up 470 total yards with 267 yards rushing and 203 yards passing. Their defense allowed the Bruins to make 500 yards but not allowing them in the end zone enough to threaten their lead.

More photos in the print or PDF edition.

END_OF_DOCUMENT_TOKEN_TO_BE_REPLACED

HOUSTON, Texas – Oct. 28, 2019 – LyondellBasell employees recently dedicated a Saturday to helping out their Rio Villa neighbors after the community flooded following Tropical Storm Imelda. About 40 volunteers, family members and Rio Villa residents gathered at the front entrance of the neighborhood on Oct. 19 armed with heavy equipment and landscaping materials to repair and beautify the two entrance signs that were nearly covered up by floodwater.

“As a company, it is part of our culture to give back to our communities even during normal times,” said Mark Gasper, project manager for LyondellBasell’s propylene oxide and tertiary butyl alcohol (PO/TBA) project taking place in Channelview. “It’s even more important that we assist our neighbors during their time of need. Rio Villa is a very close-knit community and they are very proud of their neighborhood, so it was important to us to help them recover from this storm event.”

END_OF_DOCUMENT_TOKEN_TO_BE_REPLACED

Wednesday, October 16, 2019 – Houston, Texas — At the Galena Park School District’s Administration Building, astronauts gathered from the United States, France, Germany and Hungary for breakfast before departing to visit 12 schools in the district.

NC Star writer Allan Jamail joined the international group and school officials to document the historical event as they visited the schools.

END_OF_DOCUMENT_TOKEN_TO_BE_REPLACED

Jacinto City, Tx. – Friday, October 25, 2019 at the Jacinto City Town Center, volunteers stepped up to make sure the food staples, health and personal dental hygiene kits was distributed to those requesting assistance. Over 200 people were assisted from the local communities.

END_OF_DOCUMENT_TOKEN_TO_BE_REPLACED

The Fighting Falcons move to 2-2 in district and 4-3 overall in a Homecoming win against the Beaumont United Timberwolves last week. The Falcons racked up 321 yards rushing, led by Alton Lott and Dreak Thomas who had a touchdown each and 165 and 87 yards respectively.

The defense accounted for 2 interceptions by Kechone Berryman and Trevin Chandler.

The Falcons take on the C E King Panthers Friday, October 25th at 7 pm, at the Sheldon ISD Stadium.

END_OF_DOCUMENT_TOKEN_TO_BE_REPLACED

Deer Park, TX. – Friday, October 11, 2019 at the Clyde Abshier Stadium, the Deer Park Deer were overwhelmed by 7 touchdowns (TD) from the visiting North Shore Mustangs in a district game, 49 to 7.

Coach Jon Kay’s Mustangs now have a 5 – 1 record, undefeated in district play. They led at halftime 35 – 0 and 49 – 0 after 3 quarters. Deer Park only made 1 touchdown coming in the 4th quarter.

END_OF_DOCUMENT_TOKEN_TO_BE_REPLACED

Art is highlight of this month’s Jacinto City Night Market

Jacinto City’s Market by Night had its largest crowd last Saturday, with an emphasis on an art show, and other types of artistic involvement, such as music and chalk drawing on the plaza, as seen in these photos.

Crowds appreciated the crafts and food vendors, and jewelry and other showcase items. The plaza at Town Center was crowded with display tents and tables full of homemade pastries and other delicious edibles.