A 96 inch wide water main, carrying water from the Houston water treatment plant in Galena Park to about half the city, burst on Thursday about noon. Workers from Harper Brothers were performing repair work on a small leak, according to authorities, when the whole pipe burst open flooding nearby streets and the six lane East Loop under Clinton Drive. Several feet of water covered the streets, stopping traffic and flooding about a dozen cars. Houston Fire Department said they conducted three deep water rescues. The location of the burst pipe was near the intersection of Clinton Drive and N. Carolina streets in the Clinton Park neighborhood, and buildings in that area had water inside, as outside it was several feet deep.

Water supply and water pressure were affected throughout the east side of Houston and into midtown. Schools and businesses were forced to close without water, and many indicated they would also be closed on Friday, until the pipe could be repaired and water quality restored. In the meantime, Mayor Turner called for a “boil water” advisory to everyone.

Jacinto City avoided the problem by switching from city water supply to its own well system, filling the city water tower and maintaining pressure and a safe water supply, according to City Manager Lon Squyres.

Authorities held a press conference near the break, to inform the public of the severity of the problem and what measures were being taken to solve them. Mayor Turner and County Judge Hidalgo expressed concern about water quality, and availability of adequate pressure in case of fires. Tank trucks with water were being sent to the area as a precaution, they said. 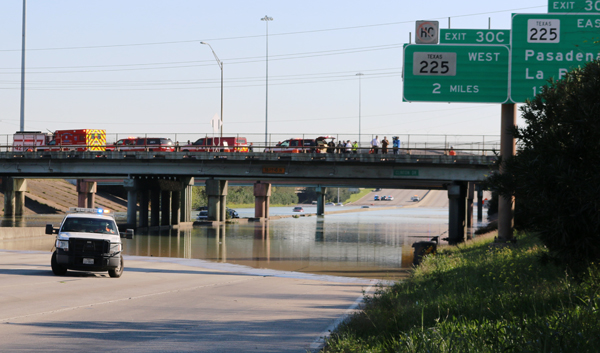 WATER CLOSES ALL TRAFFIC ON THE EAST LOOP AND CLINTON DRIVE 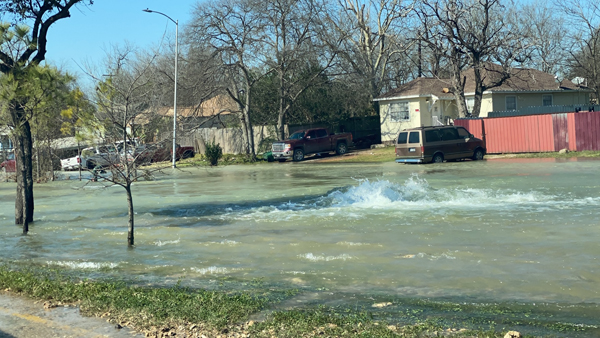 SITE OF THE BURST 96 INCH PIPE AT CLINTON DRIVE AND N. CAROLINA.

PHOTO BY KHOU SHOWS WATER FLOODING THE EAST LOOP AND CLINTON DRIVE. THE SITE OF THE BURST PIPE IS IN THE LOWER RIGHT OF THIS PHOTO.