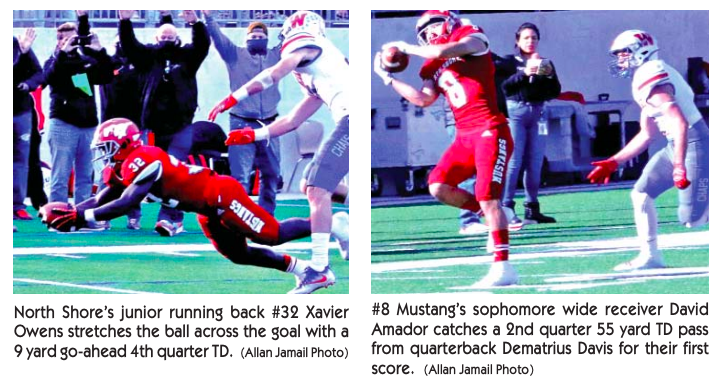 North Shore’s Dematrius Davis completed a 55 yard pass to David Amador for a TD, bringing the score within 3. Chaparrals 10, Mustangs 7. Later the Mustangs passed up a field goal attempt on fourth down while trying to pick up a first down, instead giving up the ball on loss of downs. Before halftime, Westlake extended their lead 17 – 7 on a 47 yard pass for a TD. To close the first half, Davis had his pass intercepted.

The Mustangs took the opening 3rd quarter kickoff, but Dematrius Davis was intercepted again, ending their drive and giving the ball back to the Chaparrals. The interceptions came from Westlake’s horrific pass rush, that sacked Davis 5 times.

Mustangs defense stepped up, and the Mustangs offense got the ball back. Trailing 17 – 7, Dematrius Davis ran for a 55 yard TD, bringing the score within 3 points, ending the 3rd quarter 17 – 14.

With 12 minutes left in the game, beginning the 4th quarter, both teams swapped possession several times without a score.

With 4 minutes left in the game, and North Shore staring a drive on the Westlake 19 yard line, they moved the ball 81 yards. Capping off the drive, North Shore’s junior running back #32 Xavier Owens crossed the goal with a 9 yard TD, giving the Mustangs their first lead of the game, 21 to 17.

Under 4 minutes, the Chaparrals took the ensuing kickoff on their 30 yard line and moved the ball 70 yards. Faced with a fourth-and-goal from the North Shore 1-yard line, with time ticking away, quarterback Cade Klubnik faked a handoff and rolled around to the left end. His touchdown with 1:43 left in the game was the decisive play in their victory. Their 1st quarter field goal ended up being the 3 point difference.

It looked like the Mustangs still had time to pull out a win. They took their final possession with 1:43 to play. On first and ten, a Mustangs offensive lineman was called with a motion penalty, making it first and fifteen. Faced with seconds on the clock, a pass to Shadrach Banks on fourth down. After the officials took a measurement, it was inches short of the first down.