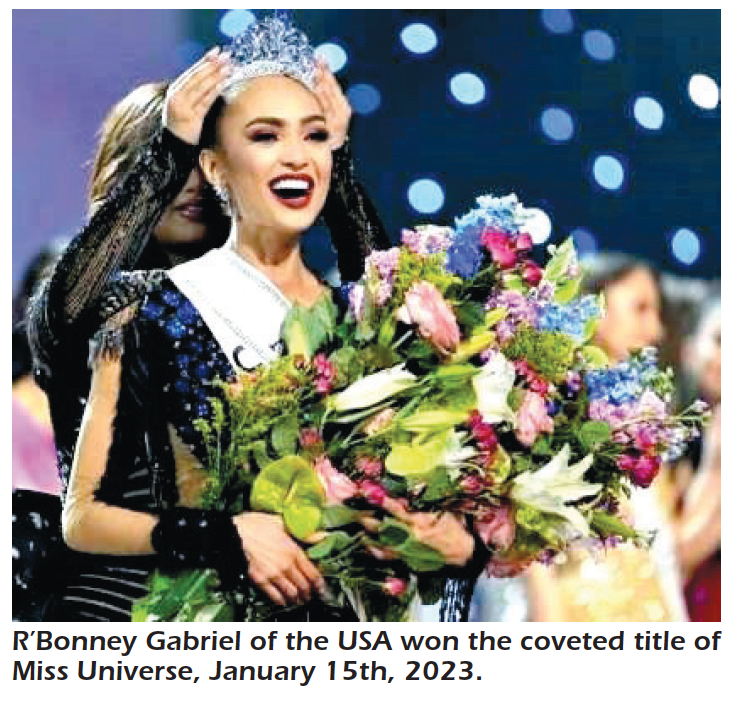 New Orleans, LA. – Saturday, January 14, 2023 the newly crowned Miss Universe is Miss USA R’Bonney Gabriel of Houston, Texas. Gabriel closed her eyes and clasped hands with runnerup Miss Venezuela, Amanda Dudamel, at the moment of the reveal of the winner, then beamed after her name was announced. Thumping music rang out, and she was handed a bouquet of flowers, draped in the winner’s sash and crowned onstage at the 71st Miss Universe Competition, held in New Orleans.

Gabriel was born in Houston, Texas March 20, 1994 and grew up in Missouri City with three older brothers. Her father is a Filipino, Remigio Bonzon “R.Bon” Gabriel, and an American mother, Dana Walker was married in the Philippines. Their daughter broke boundaries by becoming the first-ever Filipino- American to win Miss USA. She graduated from the University of North Texas with a bachelor’s degree in fashion design with a minor in fibers. She works as a designer creating “eco-friendly- clothing” and as a model. She’s worked as a sewing instructor at a nonprofit. Gabriel is a former high school volleyball player, she’s also CEO of her own sustainable clothing line.

The pageant, which was held in New Orleans with Access Hollywood’s own Zuri Hall holding down the fort as one of the hosts, was a glamorous affair, but it also shined a light on some of the outdated practices at the event.

When R’Bonney made it to the Top 5 she was asked her on-stage interview question, which was what she’d like to see changed about the pageant. The interviewer asked, “Miss Universe recently made an inclusive change allowing mothers and married women to compete this year. What’s another change you’d like to see and why?”

R’Bonney had a solid answer, sharing that at 28, which is the maximum age to compete in the pageant, she’d like to see a change on the age limit. “For me, I would like to see an age increase because I am 28 years old. And that is the oldest age to compete. And I think it’s a beautiful thing. My favorite quote is ‘if not now, then when?’ Because as a woman, I believe age does not define us. It’s not tomorrow, it’s not yesterday — but it’s now. The time is now,” she said.

In the Q&A at the last stage of the competition for the three finalists, Gabriel was asked how she would work to demonstrate Miss Universe is “an empowering and progressive organization” if she were to win. “I would use it to be a transformational leader,” she responded, citing her work using recycled materials in her fashion design and teaching sewing to survivors of human trafficking and domestic violence.

“It is so important to invest in others, invest in our community and use your unique talent to make a difference,” Gabriel continued. “We all have something special, and when we plant those seeds to other people in our life, we transform them and we use that as a vehicle for change.”

In addition to competing in pageants, she also runs her own eco-friendly clothing line, and she put her designs on display on Sunday as she hit the stage in a bright orange one-shoulder swimsuit with a cutout midriff, which she teamed with an eye-catching cape which featured the words “If Not Now, Then When?”

R’Bonney designed the cape herself which was made using sustainable dyes and plastic bottles to demonstrate “how art can be made out of what we perceive as trash.” She also made headlines for designing her own swimwear for her Miss Universe competition.