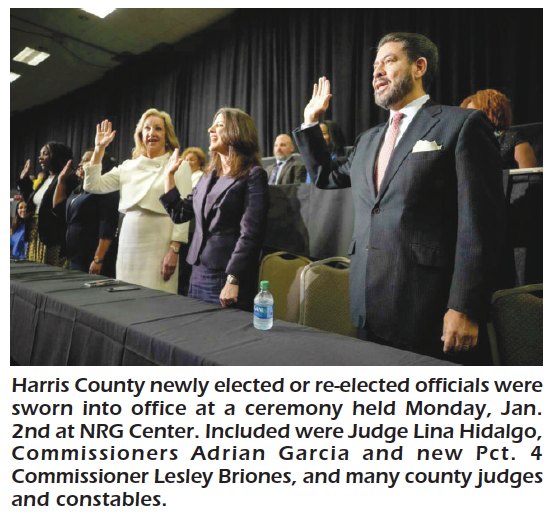 The ceremony opened with the HCSO Honor Guard presenting colors, and ended with the Pride Chorus Houston singing “We Are Family.” Bishop James Dixon gave the Invocation.

Later in the week, candidate for county judge Alexandra del Moral Mealer issued a statement saying that the vote count for offices was not correct, and that many votes had been “suppressed.” She said she would file a challenge to the count, with the intent to overturn the results.

Mealer’s statement is as follows:

“After reviewing all publicly available data, I have decided to file an election contest in light of the post-election assessment submitted by Harris County Election Administrator Clifford Tatum.

It is inexcusable that after two months, the public is no further along in knowing if, and to what extent, votes were suppressed. Far from being a “success,” as the report characterizes, there were serious operational issues that occurred throughout Election Day that call into question whether the county’s failures denied voters their right to vote. The report culminates with the ultimate “dog ate my homework” excuse of the World Series parade being responsible for delayed openings and fails to solidify the number of polling stations that suffered from ballot paper shortages.

Unlike those holding office, I do not have the weight of government behind me to investigate the matters with the gravity and effort that reports of voter suppression justify but I do have the ability to exercise my legal rights as a candidate. My decision to file an election contest is fundamentally about protecting the right to vote in free and fair elections. There aren’t a lot of things that Lina Hidalgo and I agree on but surely, we can both agree that it is un- American to suppress votes.