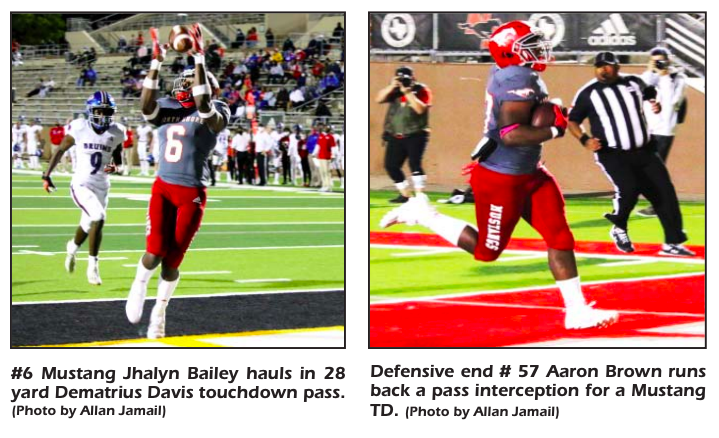 Friday, October 23, 2020 at this GPISD stadium the North Shore Mustangs in their district opener game finished off the Beaumont Bruins in short order 55 to 14.

Mustangs Head Coach Jon Kay’s team has yet to see any strong competition outside of their early season game when they defeated the Shadow Creek Sharks with a 38 to 21 score. Had Shadow Creek not had the 100 yards in penalties, the game could have been an upset for the Mustangs.

Quarterback Dematrius Davis led the offense to a 541 yard game, using his dual-threat pass run option he passed for 4 touchdowns (TD’s) and ran for another. He connected on 15 of his 19 passes for a 79 percent completion average. Later in the game backup quarterback Jaylon Williams passed to Antonio Harris for a 11 yard TD.

The stingy Mustang defense allowed only 2 touchdowns, giving up a mere 278 yards. By hurrying the quarterback to pass they made 3 interceptions. Interceptions were made by defensive backs Denver Harris, Jacoby Davis and Antonio Harris.