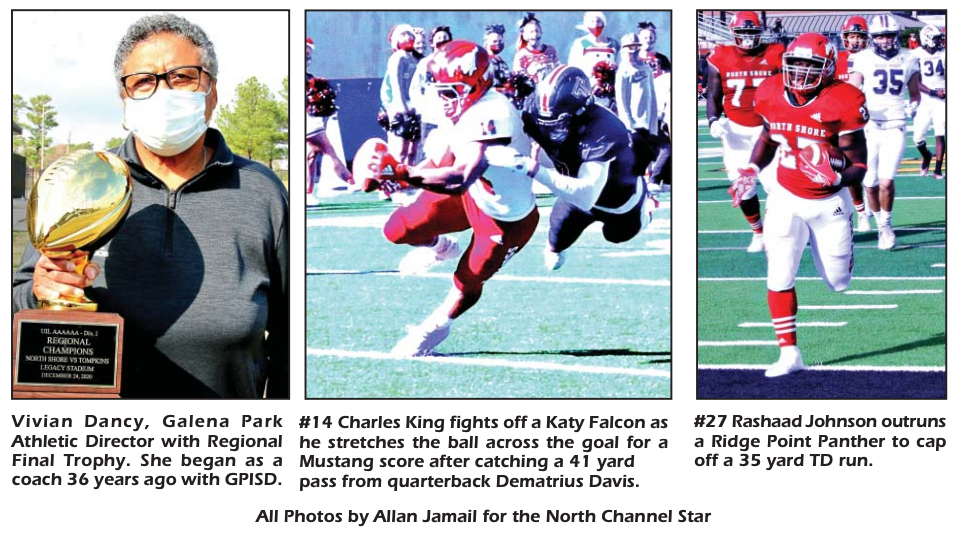 In the Regional Final game with Katy the Mustang offense made 7 touchdowns (TD’s) rushing for 301 yards and passing for 302 yards. Touchdowns were made by: Quarterback Dematrius Davis (4), Shadrach Banks (2) and Charles King (1). Davis passed for 302 yards and 3 TD’s, completing 78 percent of his passes. Extra point kicks were made by Carlos Dominguez and Stephen Guzman.

In the Quarterfinal game against Ridge Point, the Eastside Boys took the title. Under head coach Jon Kay these two wins gave them a 28 consecutive win-streak, winning 44 of their last 45 games. If they win the upcoming semi-final, they’ll get to play for their 3rd consecutive state title. If they win it, they’ll make Texas 6A football history, as no 6A team has ever accomplish this.

After the 6A Division I Region III final game, Kay said, “Any time you get an opportunity to represent the city of Houston, especially in the Division I bracket, you’ve got to appreciate it. It’s a big accomplishment for the team, kids, and this community. Everybody in the Mustang Nation is a part of it.”

The Mustang defense allowed the Panthers only 2 TD’s, giving up 259 total yards and causing 2 fumbles and a pass interception. They sacked the Panthers Quarterback Bert Emanuel Jr. 4 times in the first half. On the last play of the 2nd quarter, Emanuel got injured and never returned to finish the game.

North Shore’s offense made 545 yards, both passing and rushing. With 8 TD’s, quarterback Dematrius Davis, an Auburn signee, passed for 156 yards, completing 70 percent of his passes and 2 TD’s, and he ran for 3 TD’s. His first passing TD of the game went to his favorite receiver Shadrach Banks, a Texas A&M signee, who caught an over-the-middle pass on their own 9 yard line and ran 91 yards for the score.