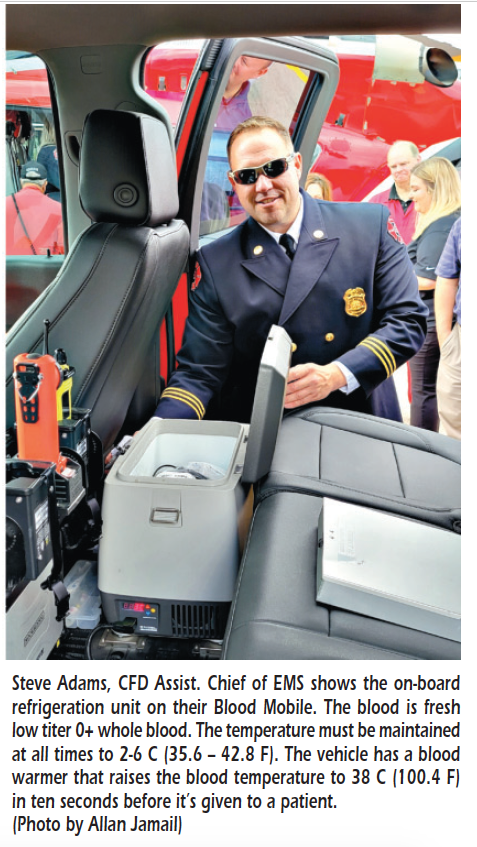 HOUSTON (December 9, 2022) – The Channelview Fire Department (CFD), at the helipad of the Channelview LyondellBasell complex, had their representatives, and those of LyondellBasell and Memorial Hermann Life Flight, gather to celebrate their launch of a new pre-hospital Whole Blood Program to address severe blood loss in emergency settings.

According to Jimmy Sumbera, CFD’s Administrator, this day was a dream come true for his department. Sumera had told me over a year ago the ability to administer blood in the field to a patient was in the works and how important it would be in saving lives.

According to CFD’s EMS Assistant Chief Steve Adams, before this new program, it normally took his EMS crew five minutes to arrive on a scene in Channelview. If a person was bleeding and in need of blood, it then took another twenty minutes to get them to a hospital to get blood. In this amount of time, lives are lost. 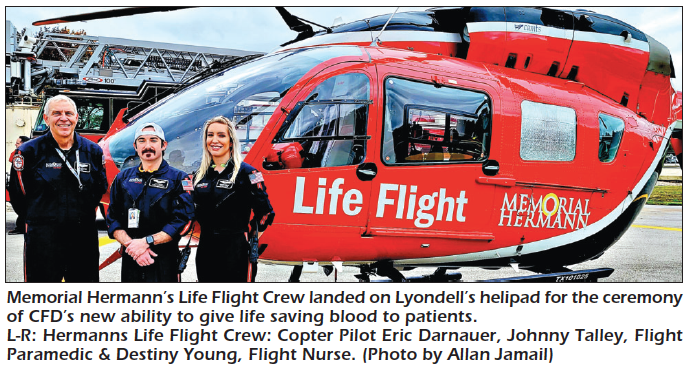 He said then if they called Hermann’s Life Flight, which carries 6 units of blood on board, this still is a delay of 20 minutes or more before the person begins getting blood. Again, in this amount of time, lives are lost.

As a former Chief of Police, I can remember the agony of watching victims “bleed out” and die because there wasn’t enough time to get them a transfusion. “There’s nothing worse than watching helplessly as a child bleeds to death,” Allan Jamail said.

Chief Adams said, “Now with their new ability to arrive with blood on board, we can immediately give blood to a patient, reducing the time to more than half.”

He said two patients lives have already been saved on two separate events with their new ability. The first unit of blood ever given by CFD was given by EMS Supervisor Deivi Vigil, and Paramedics Jason Foster and Kristopher Henson.

“All the entities that helped us played a key role in the survival of this critically injured person,” Adams said.

According to Lindsey Klingensmith of Memorial Hermann (who provided information for this article), “Funded by a $10,000 grant from LyondellBasell and modeled after Memorial Hermann Life Flight’s Pre-hospital Blo Product Administration Program, CFD now carries one unit of O positive Whole Blood on board for patients that experience any medical or trauma-related condition that results in uncontrolled hemorrhage.”

Tony Wood, Site Manager for the LyondellBasell Channelview Complex, said, “Our emergency responders are critical to our communities, and vital within our operations at LyondellBasell. We are honored to support CFD’s Whole Blood Program, and grateful for the sacrifices and relentless efforts that our first responders make every day; they are true heroes to our community.”

Chief Adams said, “Because of the generous grant donation from LyondellBasell, we’re able to obtain the proper equipment to store and administer the whole blood. Gulf Coast Regional Blood Center’s quality assurance team directed our process with the storing, maintaining, and the documentation of whole blood. Memorial Hermann Life Flight provided a plethora of knowledge when it came to writing the medical guidelines and policies for the administration of whole blood and the blood warming device.”

“Once each of these aspects came together, and months of training were completed, we were able to start the whole blood program. Every citizen who resides in our response district, as well as anyone passing through, will now have a better chance of survival, should they be experiencing a medical or trauma-induced uncontrolled hemorrhage. The end goal is to keep organs and tissues perfused with whole blood, while en-route to a definitive care hospital. We at the CFD deeply appreciate the support and dedication from LyondellBasell, Memorial Hermann Life Flight, and Gulf Coast Regional Blood Center that made such an enormous impact to the citizens we serve,” Adams concluded.