Galena Park, TX. – June 28, 2022 – The Galena Park Police Department is asking for assistance in providing information on the whereabouts of three fugitives wanted for violating their terms of probation by failure to report their whereabouts to a law enforcement agency.

All three of the fugitives were convicted of violations of the Texas Penal Code of Indecency with a Child by Contact. Warrants have been issued for their arrest on failure to report under the Texas Code of Criminal Procedure Title 1, Chapter 62 – Sex Offender Registration Program as follows: Registered sex offenders are required to periodically report to the local law enforcement authority to verify the accuracy of the registration information and to promptly report certain changes in the information as those changes occur. A sex offender who fails to comply with any registration requirement is subject to felony prosecution.

END_OF_DOCUMENT_TOKEN_TO_BE_REPLACED

Facilitator Diane Sheridan opened the meeting, and introduced Glenda Squyres as the Secretary, and said that CIP celebrated its 10th Anniversary in 2021. Its formation began in October 2010 with a team of community members and plant representatives who developed ground rules and selected the core membership.

• Recycling is the process of collecting and processing materials that would otherwise be thrown away as trash and turning them into new products. (EPA)

• When we refer to recycling, we often mean avoid, reduce, reuse, and recycle.

• Recycle is the last step before disposal in the waste hierarchy.

Plant members, CIP cities, individuals, and the Harris County representatives attending presented what they do in recycling and what they recycle.

END_OF_DOCUMENT_TOKEN_TO_BE_REPLACED

Galena Park, TX. – June 8, 2022 – The Galena Park Police Department is asking for assistance in identifying, providing information and or any leads of who the suspect (see sketch) is who committed a Sexual Assault of a Child back in 2021.

Detective Jessica Bolanos and the police department received a report on November of 2021 of a sexual assault victim in Galena Park. During the investigation the victim made an outcry of being sexually abused by an unknown male (see sketch).

The suspect is a Hispanic male, approximately 25 – 30 years of age, average built, with very short black hair. He has tattoos on his forearms.

If you have information about the suspect contact the Galena Park Police and or Detective Bolanos at 713-675-3471.

END_OF_DOCUMENT_TOKEN_TO_BE_REPLACED

Galena Park, Texas ~ Sunday, May 29, 2022, over 300 family members and friends of Archie Bourgeois turned out to help him celebrate his 100th birthday. Galena Park’s Mayor Esmeralda Moya presented him a Proclamation honoring his birthday, and Pct. 2 Constable Jerry Garcia made a congratulatory speech.

Each of his children took to the stage and made personal comments about their upbringing and fond memories of their beloved dad. Guests enjoyed live music and refreshments of bar-b-q, birthday cake and other goodies. His family members wore tee shirts with Archie’s favorite saying printed on them, EVERYTHING’S LOVELY.

END_OF_DOCUMENT_TOKEN_TO_BE_REPLACED

GALENA PARK – Tuesday, May 17th, in the Galena Manor subdivision, in the quiet hours just before midnight, neighbors were awoken by loud gunshots, causing them to panic and duck for cover.

According to Willie Willis and her daughter Nadine Huff, the shots rang out so loud as if they were coming into their home from across the street at 2514 Fourth Street. Willis said it was just before midnight on the 17th, she was watching her favorite religious program, when all of a sudden she said she heard, “pow, pow, pow, pow, pow, pow sounds coming from a gun. I was so scared I got on my hands and knees and crawled to my bedroom and lay down on the floor praying I’d not be shot.”

According to Harris County Sheriff Office, the Galena Park police and fire departments were dispatched to the scene about midnight. Upon arrival, police and rescue personnel located two women, a 47 and 23 years old, and a man about 50 years old, with gunshot wounds. The man was the shooter and he died from his injuries, which they later discovered were self-inflicted. A family friend said the shooter was the mother’s ex-boyfriend.

END_OF_DOCUMENT_TOKEN_TO_BE_REPLACED

Jacinto City, TX. – Saturday, April 9, 2022 – District 143 State Representative Ana Hernandez had another successful food distribution event where hundreds of vehicles, many with more than one family in them, lined up to get help. Hernandez is known throughout the North Channel area for spreading help to the needy.

State Representative Hernandez’s staff, District Director Adriana Aguirre Hernandez and Community Liaison Linda Jamail, created a well-organized event which included over fifty volunteers from Galena Park High School and other organizations, who moved hundreds of vehicles through the line quickly so that volunteers and Rep. Hernandez could load the commodities into their vehicles.

END_OF_DOCUMENT_TOKEN_TO_BE_REPLACED 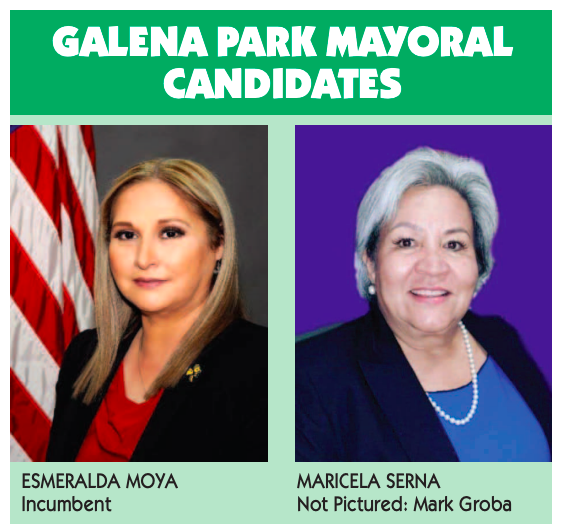 HARRIS COUNTY – The Municipal and Local primary election will take place on Saturday, May 7 with a low voter turnout expected by authorities. No major candidates are on the ballot, only two state constitutional amendments and a number of bond issues for local districts, and local candidates.

In the North Channel area, voters will decide on a new mayor for Galena Park, and a major bond issue for Sheldon ISD.

In the Sheldon area, due to explosive population growth, the school district is asking voters to approve 3 bond issues, totaling $736 million, for new schools, buses, a multi-purpose arena, and a natatorium. 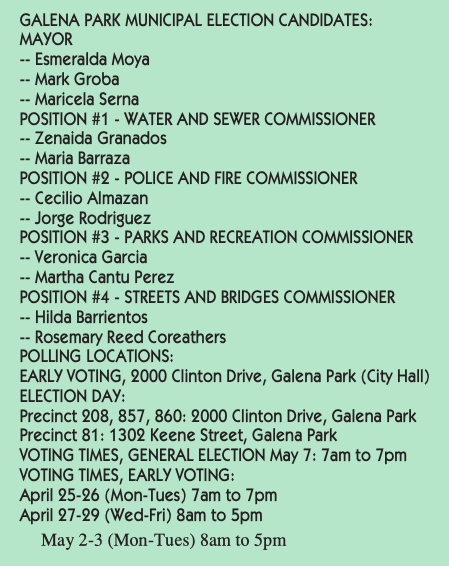 Since the main issues on the ballot have to do with two Constitutional Amendments that may lower your taxes, State Senator Paul Bettencourt has issue the following analysis (edited) to aid all voters:

END_OF_DOCUMENT_TOKEN_TO_BE_REPLACED

Galena Park/Jacinto City, TX. – On Tuesday April 12, 2022, Christmas came early for the communities of Galena Park and Jacinto City. Congresswoman Sylvia Garcia of the 29th Texas Congressional District presented $4 million to be used for community improvement projects. The funds are part of a larger $10 million nine Community Projects Funding request led and secured by Garcia, and will also include projects for Houston and South Houston.

The funding came from the historic $1.5 trillion Bipartisan Omnibus Appropriations Bill that President Joe Biden promoted and Rep. Garcia supported. It provides a substantial increase in spending for domestic and national security but also sends $13.6 billion in emergency aid to Ukraine in its defense against the Russian invasion. Both parties scored political victories in the spending bill.

END_OF_DOCUMENT_TOKEN_TO_BE_REPLACED

GALENA PARK, March 23, 2022 — At the Galena Park Police Station, I sat down with Chief Richard Wagner, the seventh and newest police chief for the city in seven years, for one reason or another. I’ve interviewed 5 police chiefs in that same office in a short period of time. Hopefully this one will have a long career there.

As a former police chief myself of Jacinto City, Chief Wagner and I had lots to share with each other about policing, as well as a few old “war stories.” I found out he’s a pet lover and has a new puppy named, GALENA.

We both agreed that policing and city politics should not be intertwined. He said since he’s new to the city, he’s not a part of any political faction and wants to be friends with all the citizens and make them a good chief and give them the best police services possible. It’s hard enough for law enforcement to do their jobs without fear of stepping on some friend of local elected official’s toes.

The city is fortunate to have Chief Wagner. He has an extensive law enforcement background in education and experience. In my opinion Chief Wagner is going to make the city a good chief if he’s allowed to, and given what the department needs of ample personnel and equipment.