City Manager Lon Squyres said the city’s police, fire and emergency management departments each has one. The drones have speakers, night lights as well as infra red night vision cameras, costing about $4,500 each.

Lt. Mark Longrigg one of the police department’s drone operators said, “These drones are and will be used for many purposes, such as assisting us in locating lost children, elderly and etc. Ariel surveillance to locate suspects, suspect vehicles, etc. We’ll use them to access locations that might be inaccessible to patrol vehicles and personnel.”

The Federal Aviation Administration (FAA) has restrictions on where drones can and cannot fly, rules regarding air space use and they cannot be flown over 400 feet high.

NORTHEAST HARRIS COUNTY – The approach of fall like weather did herald the return of Friday night lights to local football fields, although many locals feared COVID 19 would forestall this season.

Due to the on-going COVID-19 pandemic, Galena Park I.S.D. Athletic Facilities will be at limited capacity for the 2020- 2021 season. North Shore Mustang and Galena Park Yellow Jacket fans can watch all home games live, on the new GPISD Athletics YouTube Channel. Although you will not be able to cheer on your team in person, we hope you will root on the Mustangs or Yellow Jackets from afar for each home game.

October 2 the Yellow Jackets stay home to take on Caney Creek of Conroe in a non-conference game.

Baytown Sterling comes to town Oct. 16 at 7:00 for a conference game.

HIGHLANDS – Concerns for the Coronavirus have put a temporary end to public meetings regarding the remediation of the toxic waste pits in the San Jacinto River.

But twice this month, Jackie Young Medcalf, the director of the San Jacinto River Coalition and THEA, held ZOOM meetings on July 1 and 15, to inform the public on the status of the remediation project for the pits.

The concentration of meetings was due to the release by the EPA of the 30% RD, or Remedial Design documents. There were over 30,000 pages of data and narrative, covering the Northern and Southern impoundment areas, and the Sand Separation area.

In addition to the report, EPA confirmed that the toxic material was deeper than first thought, and that remediation would take longer than announced.

The time line has stretched from a 2 year project, to now what is expected to take 7 years to complete, according to the engineering consultant, GHD Corp. On top of that, Jackie announced in the July 15 Zoom meeting that EPA had just granted a 160 day extension to the start of the project, moving it well into the year 2028. This will likely conflict with TxDOT’s plans to replace the I-10 bridge with a higher, wider highway.

Jackie said that in examining the RD documents, she was concerned about omissions and inconsistencies. She said that there was not enough “due diligence” exhibited in the work process, nor transparency. In the health and safety section of the RD, she said it was too generic and did not address the specific problems of this site, such as barge traffic and weather extremes such as hurricanes and floods. 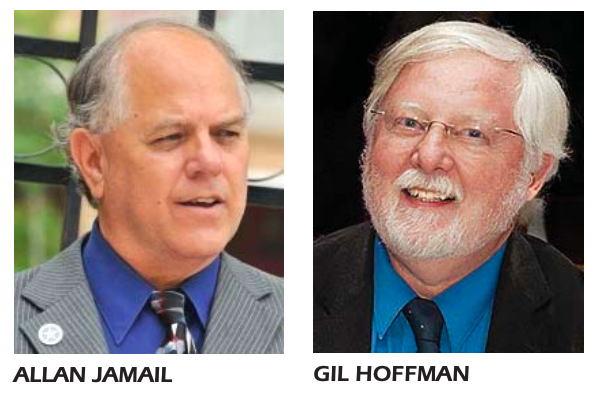 On Monday evening, September 14, 2020, Galena Park I.S.D. recognized Mr. Hoffman and Mr. Jamail during the Board of Trustees meeting.

Due to Harris County Public Health Department (HCPH) and the Centers for Disease Control (CDC) guidelines, the meeting was virtual.

Allan Jamail wrote the following in response to the honor bestowed by the Galena Park trustees:

Today, September 15, 2020, marks the beginning of a month long celebration recognizing the contributions Hispanics have contributed to the United States. National Hispanic Heritage Month is celebrated from Sept. 15 through Oct. 15.

Allan Jamail, North Channel Star writer said, “I write this article to honor Puerto Rican civil rights pioneer Felicitas Mendez.” She is a Puerto Rican immigrant and her husband Gonzalo took on California school segregation laws after their three children were denied entry at a local elementary school because of their skin color in 1944.

The success of the Mendez v. Westminster case made California the first state in the nation to end segregation in school. This paved the way for the better-known Brown v. Board of Education when Blacks were also denied an education in a segregated White school. It was this case which would bring an end to school segregation in the entire country.

In 1968, President Lyndon B. Johnson signed a proclamation to establish Hispanic Heritage Week. In the proclamation, the 36th president wrote, “The people of Hispanic descent are the heirs of missionaries, captains, soldiers, and farmers who were motivated by a young spirit of adventure, and a desire to settle freely in a free land. This heritage is ours.”

HUFFMAN – The day national polls talked about a lack of enthusiasm by Latinos and a five point slip in the polls for the Democratic Presidential Candidate since the selection of a Vice Presidential running mate, Kamala Harris, locally, the zeal of the Republican ticket was abundant on Lake Houston.

The Lake Houston Marina and the Lake Houston Brewery east on both sides of the McKay Bridge were stages for Lake Houston Party Boaters, a group of about 458 members, to launch close to 800 water craft for the Big T 2020 Parade at 2:00 p.m. last Saturday.

That was a follow up from the Lake Houston Fun Run where participants donated $10 to benefit Texas Adaptive Aquatics. Awards were presented after the event at Lake Houston Brewery. The held a captains meeting at 1:00 p.m. to advise of safety precautions and distancing.

That group was joined in the parade by Lake Houston Voters for Trump sporting about 383 members that describe themselves as “A group of people to support Trump, like to keep their own money and have fun. They simultaneously launched Trump 2020 – Lake Houston Boat Parade.

Census Parade emphasizes the need to Be Counted

HARRIS COUNTY – U.S. Congresswoman Sylvia Garcia has organized an intense public effort to count as many residents of the area as possible, stating that federal dollars that are sent to the state, county, and city are dependent upon the number of people counted and living in the area.

To draw attention to the need to sign up in the Census, Garcia and other community leaders have organized “Census Caravans” that drive through neighborhoods and urge residents to complete their census forms. Garcia says it only takes 5 minutes to complete the questionnaire, and can be done in several different ways.

Last Saturday the Census Caravan drove through the streets of East Aldine. Authorities have noted that this is one of the areas where only a small percentage of the residents have registered.

Prior to the Caravan leaving on its neighborhood tour, community leaders spoke on the importance of a complete census count.

Mayor Turner noted in his remarks that only 40% of the eligible residents in the city have been counted so far. Only a few weeks remain until September 30, when the Census Bureau stops its field activities of counting. This includes door-knocking, online responses, over the phone, and by mail. After that the bureau will make adjustments and assumptions, and deliver a final count by December 31.

Students and parents are welcome to study and use for virtual learning. The Study Zone is open daily, from 8am to 6pm. Additionally, the Harris County Public Library will be onsite every Tuesday from 12 noon to 4pm with their mobile library providing e-cards, support with their digital material and book give-away services.

Harris County Pct. 2 Commissioner Adrian Garcia held a Zoom meeting last Monday night, to get the public’s input and ideas on how to develop a Comprehensive Plan for Parks and Trails in Precinct 2.

About 100 persons participated in the session, which lasted about an hour, exceeding the time planned because of the enthusiasm of the callers and the commissioner.

Adrian Garcia said that he wants Pct. 2 to have a reputation for outstanding parks, that attract people and publicity, and where people can have a good time. He noted that good parks also increase property values.

Garcia revealed that he has an experienced architectural landscape and urban planning firm working on the project. This is Asakura Robinson, headed by Keiji Asakura.

Also participating in the Zoom meeting and the planning for the parks are representatives from Pct. 2 and also the Harris County engineering department. Another consultant is Jose Eduardo Sanchez, a community engagement specialist.

NORTH CHANNEL – School districts in this area are planning on starting classes on Tuesday, September 8. Some had planned an earlier start, in August, but changed their schedule on the advice of health authorities.

Class instruction will open at first only virtually, or on the internet, and after a period of several weeks, will change to a hybrid model where parents can choose to continue at-home learning, or face-to-face in-person in school. In Sheldon and Galena Park, this change will occur in four weeks. In Channelview the change will be in three weeks. However, all districts have stated that they will evaluate the health concerns at the time of change-over, and the schedule may be adjusted further.

In Galena Park ISD a new superintendent will be in charge, Dr. John Moore.

Moore has been educator in the Galena Park ISD system for nearly 30 years. Dr. Moore is overseeing the unusual situation of starting school in the midst of a pandemic. He has instituted a number of practices meant to ensure the safety of students and staff when they finally meet in face-to-face classroom situations.